The 7I85 is a five channel RS-422 serial plus four channel encoder interface for Mesa's Anything I/O series of FPGA interface cards.  The 7I85 is designed for motion control applications.  A common usage of the 7I85 would be connecting up to four serially interfaced drives to four of the 7I85's five full duplex RS-422 interfaces and up to four encoders with index to the 7I85s encoder inputs.  Encoder inputs can be TTL or differential on a per input basis.  The 7I85 can also supply 5V power to encoders.  A 7I85S version is available that replaces four of the serial interfaces with 8 differential ouputs that can be used as four differential step+ dir output pairs or PWM outputs or other output functions. The controller connection is a DB25 connector that matches the pinout of Mesa's 25 pin Anything I/O cards.  All buffered I/O is terminated with 3.5 mm pluggable screw terminals (supplied). 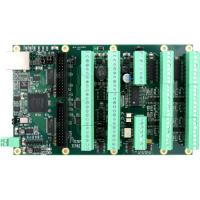 The 7I76E ia a remote FPGA card with Ethernet interface designed for interfacing up to 5 Axis of.. 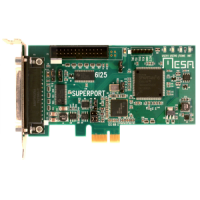 MESA 6i25 Superport FPGA based PCIE Anything I/O card

The MESA 6I25 is a low cost, general purpose, FPGA based programmable I/O card for the PCIE bus... 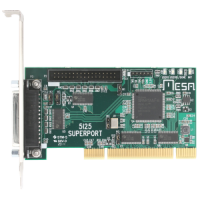 MESA 5i25 Superport FPGA based PCI Anything I/O card

The MESA 5i25 is a low cost, general purpose, FPGA based programmable I/O card for the PCI bus.&..